Jan 20, 2023  |  7 min
Note
More mature than a scribble, but not yet what digital gardener Maggie Appleton calls an “evergreen” idea. A note may have taken a fair amount of time to develop. I think the idea has merit.
(See digital gardening.)
|  Story structure Bracketing MICE quotient Story Craft

In an earlier note, we introduced the concept of bracketing, a foundational, three-unit story structure following an A - B - A pattern. Now, we’ll explore how that simple form can be layered into more complex structures — the kinds of structures you see often in novels and movies and short stories.

There are probably as many different manifestations of layered bracketing as there are theories of story structure itself. We’ll look at three examples, which I’ve found to be especially helpful.

Chiasmus around the midpoint 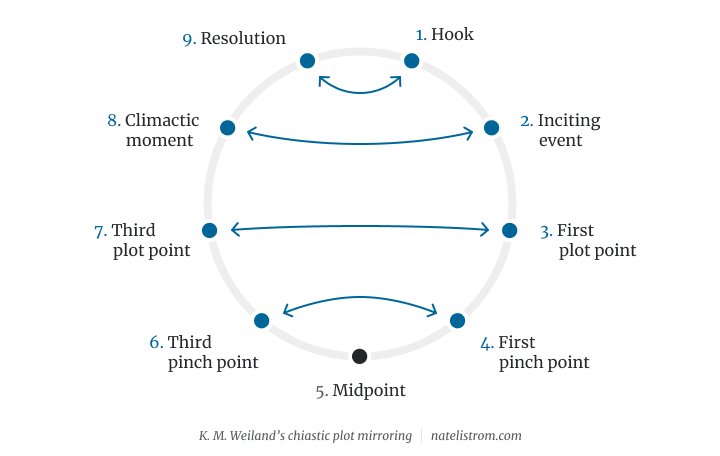 The idea of a story structure reflected around the midpoint isn’t unique to Weiland. Television producer and script editor John Yorke articulates a quite similar idea (though he uses a five-act framework instead of Weiland’s nine-point plot structure):

“If you take any archetypal story and imagine folding it over on itself at the midpoint, it’s possible to see with far greater clarity just how great story’s aspiration for symmetry is. Not only do the first part of act one and the last part of act five mirror each other, but act four becomes a mirror of act two, and one half of the third act, bisected at the midpoint, becomes a mirror image of the other.” Yorke, John. Into the Woods: A Five-Act Journey Into Story. Overlook Press, Peter Mayer Publishers, Inc., 2015. Kindle Edition.Yorke. Into the Woods. Loc 2020.

Even before contemporary plot theorists, the idea was around. Freytag’s pyramid, at least as it is most commonly expressed, is an example of a chiastic structure. Freytag himself hints at chiasmus when analyzing Euripides:

“Electra has a very simple construction. It consists—besides prologue and catastrophe—of two stages of the ascent and two of the fall; of these, the two standing nearest the climax A are united with this into a great scene-group, which makes specially conspicuous the middle point of the play.” Freytag, Gustav. Technique of the Drama. Translated: Elias J. MacEwan. 6th German ed. Chicago: S.C. Griggs & Company, 1895.Freytag. Technique. Chapter 2 - Construction of the Drama; “Sophocles’ Construction of the Drama” Section.

A. There's some potential for confusion here, since Freytag uses the term “climax” to describe what modern story theorists call the midpoint. He uses a different term, “catastrophe,” to refer to what we typically think of as the climax and resolution.

Direct chiasmus isn’t the only form of large-scale bracketing that storytellers can employ.

Writer and Producer Dan Harmon also discusses a mirroring structure for story units. However, in his model, the mirrored story moments are plotted on a circle, and Harmon draws a bisecting line from the story unit on one side of the circle to the one directly opposite.

“Just as (3), the crossing of the threshold, is the opposite of (7) the return, (5), the meeting with the goddess, is the opposite of (1), the protagonist’s zone of comfort . . . As you might expect with a circular model like this, there is a lot of symmetry going on, and on the journey back upward, we’re going to be doing a lot of referencing to the journey downward . . . When in doubt, look at the opposite side of the circle.” Harmon, Dan. “ Story Structure 104: The Juicy Details.” Channel 101 Wiki, Fandom.com. 2009.Harmon. “The Juicy Details.” (Emphasis mine.) 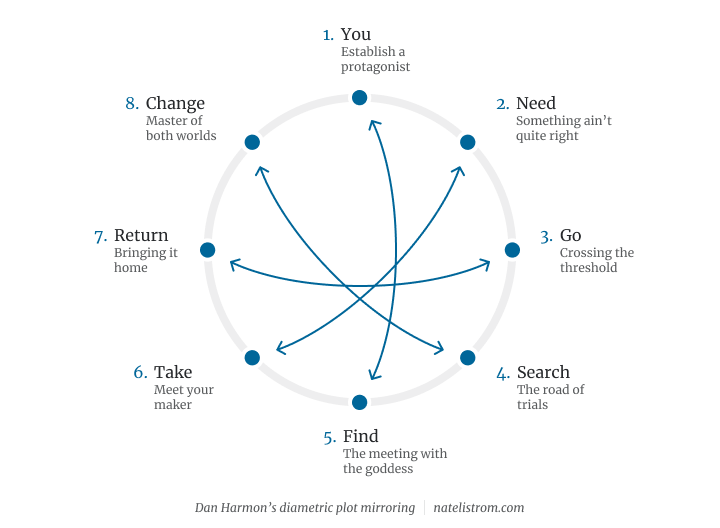 Harmon’s diametric mirroring provides an interesting method for placing setups and payoffs. For example, Harmon suggests that if your story has a “lucky coincidence” to help save the protagonist in the climactic “change” moment, it can be set up by forcing the protagonist to earn it during the “search” phase of the protagonist’s journey, which happened back before the midpoint.

“One really neat trick is to remind the audience that the reason the protagonist is capable of such behavior is because of what happened down below . . . the opposite of (8) [the climax] is (4), the road of trials . . . Remember that zippo the bum gave him? It blocked the bullet! It’s hack, but it’s hack because it’s worked a thousand times . . . Why is this not Deus Ex Machina? Because we earned it.” Harmon, Dan. “ Story Structure 104: The Juicy Details.” Channel 101 Wiki, Fandom.com. 2009.Harmon. “The Juicy Details.”

Intuitively, this resonates. The moments leading up to the midpoint, for example, are where the protagonist learns to navigate the new world and build alliances. It’s natural and satisfying that these gains pay off in the climax. So also, each other diametric pair creates opportunities for setups and payoffs.

On the Writing Excuses podcast, author Mary Robinette Kowal discusses Orson Scott Card’s MICE quotient. Kowal explains how each of the MICE elements in a proper story structure should act like brackets for the different sub-stories they contain.

“The way I think about it is as nesting tags in [HTML] programming. So like if you want to have a bold italic word . . . You start with the bracket B . . . bracket B bracket I. Then you have to go bracket I bracket B. You have to close out both of them and you close them out in the [reverse] order in which you opened them . . . I find that the same kind of concept generally works when I’m using MICE elements in fiction. If I start with the idea, then I have to end with the idea. I can do character in the middle of that, but that I have to end where I started. Kowal, Mary Robinnette, Brandon Sanderson, Howard Tayler, and Dan Wells. “Writing Excuses 6.10: Scott Card’s M.I.C.E. Quotient.” Writing Excuses, published 7 August 2011. (Transcript.)Kowal. “MICE Quotient.”

In other words, when using multiple MICE quotient story types, the opening and closing of each story type should properly nest. If you open on milieu, for example, and then go on to an idea story, resolve the idea story before resolving the milieu story (M - I - I' - M').

This suggests a chiastic bracketing similar to Weiland’s. The main difference here is that, rather than being chiasmus of the story units within a single story arc, Kowal is talking about nesting multiple story arcs within each other. This is a common form in Hollywood, for example, where a romantic “B plot” is nested within a larger “A plot” of action or comedy or drama.

Note that while Weiland’s and Harmon’s frameworks imply a proportional balance to the bracketing (Weiland’s inciting event and climactic moment mirror each other at roughly 12.5% and 87.5% of the story, respectively), Kowal’s model does not. In many stories, the subplots are slowly layered in as the story builds, and then, for dramatic effect, they are all closed in a relatively short space during the climax. This is totally fine. The point in Kowal’s framework isn’t that the subplot openings and closures be proportional but that they nest in the proper sequence.

The bracket of the main plot

Kowal’s nested subplots framework leads us to conclude with one final observation about bracketing, which comes from Orson Scott Card himself:

Once the first major plot arc resolves, the audience expects the story to be over. Narrative drive evaporates, and any remaining threads feel like leftovers.

This might explain the negative reactions that some audiences had to the ending of Tolkien’s 1954-55 trilogy, The Lord of the Rings and, especially, Peter Jackson’s 2001-03 film adaptations.

Tolkien’s story follows the quest to destroy the One Ring, a magical object of great power and evil. But, after the ring has been destroyed, the books go on to recount the protagonists’ journey home and additional efforts they must undergo to cleanse their home from remaining scourge.

Tolkien’s ending is realistic. Unlike Western stories, in life, the greatest struggle is often not the final one. In addition, his chosen story order has what are, most probably, intentional thematic implications. Evil isn’t always concentrated in one place, and the vestiges of corruption can endure long after their initiators are gone.

Nevertheless, critics aren’t wrong when they claim that the story felt like it could have ended when the ring was destroyed. This is because the main story bracket — and a very powerful one at that — had already closed.

Creating story arcs with three-unit brackets
Bracketing is a three-unit story structure following an A - B - A form. It’s often used to illustrate transformation by returning to a familiar image, motif, setting, or situation where something has changed because of the intervening story.

Email hello@natelistrom.com to get updates as soon as they’re ready.